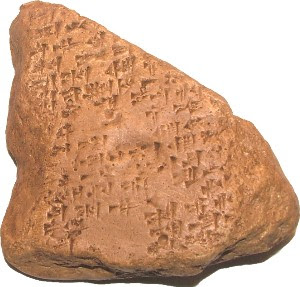 One of the 19th-century archaeological discoveries in the ancient Assyrian library at Nineveh was the Gilgamesh flood account. Henry Layard found this on some tablets in the 1850s and sent it to the British Museum, where it was translated in 1872 by George Smith. It was believed that the account originated in about 1600 B.C. in Babylon.

Actually the Gilgamesh Epic should be named the Utnapishtim Epic, because it purports to be the account that Utnapishtim told Gilgamesh of how that he survived the flood and gained immortality.

Skeptics immediately used the Gilgamesh Epic as evidence that the Bible’s flood account is just one among many ancient legends.

A Bible believer will reject all three of these, being convinced that the biblical account is what it claims to be: divine revelation. Only willful prejudice would fail even to consider this fourth “possibility,” and this willful unbelief is described in Peter’s amazing prophecy.

“Knowing this first, that there shall come in the last days scoffers, walking after their own lusts, and saying, Where is the promise of his coming? for since the fathers fell asleep, all things continue as they were from the beginning of the creation. For this they willingly are ignorant of, that by the word of God the heavens were of old, and the earth standing out of the water and in the water: Whereby the world that then was, being overflowed with water, perished” (2 Peter 3:3-6).

How did Peter, writing 2,000 years ago, know about the unbelief that would characterize modern science? Such unbelief did not exist in his day. In fact, it was not until the 19th century that this willful ignorance came to the fore. Fulfilled prophecy is indisputable evidence of the divine inspiration of Scripture, and the very unbelief of modern archaeology witnesses to the Bible’s truth!

The fact is that the Bible’s flood account is of an entirely different character than the Gilgamesh account. The Bible’s account is not a wild-eyed fable, whereas Gilgamesh is.

Gilgamesh is an account of pagan gods who are weak and man-like and competitive. They are also dishonest and deceptive. After the chief god Ea takes an oath from the other gods not tell mankind about the decision to send the flood, he decides to tell one man named Ut-napishtim. Ea tells this man to keep the flood a secret from all other men and to lead them to think that the gods are going to bless them instead of destroy them.

When the storm comes, the gods are so frightened that they flee to heaven and cower like dogs, crouching outside the door of the chief god Anu.

The Gilgamesh ark is a CUBE 200 feet square and six stories tall. It would have been incredibly unstable and could not have survived the powerful flood conditions.

The Gilgamesh flood lasts only six days and nights.

Following are some excerpts from the Gilgamesh Epic:

“The gods in council decided to send the flood, and Ea, the god responsible for creating man, took an oath with them not to tell mankind about it. Ea, however, wanted to warn his worshipper Ut-napishtim, and so spoke to his house.

“Reed-hut [Ut-pahishtim] pull down the house, build a ship! Leave riches, seek life! Spurn possessions in order to stay alive. Take the seed of all creatures board the ship. The ship you are to build its measurements shall equal each other. Its width and its length shall be the same. ...

“[At this point there is a discussion about how Ut-napishtim could explain the ark to his fellow citizens. The solution is to deceive them into thinking that the gods are going to bless them.]

“Whatever living creatures I had I put aboard it [the ark]. I made all my family and relatives board the ship. ... All the craftsmen, I made go aboard. ...

“I boarded the ship and closed the door ... With the first glow of dawn, a black cloud rose up from the horizon. Inside it the storm-god thunders. ... The god of the underworld tears out the posts of the dam. The warrior-god leads the waters on. The gods raise the torches, setting the land on fire with their blaze. The fearful silence of the of the storm-god reached the heavens. ... The gods were frightened by the flood. They went off up to the heaven of the chief god. The gods cowered like dogs, crouching outside the door. The goddess Ishtar cried out like a woman in labour. ... The gods weep with her. ...

“When the seventh day arrived, the storm and flood ceased the war. ... On Mount Nasir the ship landed. ...?
“I made a libation on the peak of the mountain. The gods smelled the savour. The gods clustered like flies around the sacrifice. When at last the great goddess [Ishtar] arrived. She lifted up the big fly [beads] which the chief god had made to amuse her. ‘All you gods here, as I shall never forget my lapis lazuli necklace, I shall remember these days and never forget them...” (this citation from the Gilgamesh Epic is from Alan Millard, Treasures from Bible Times, pp. 42, 43).

The Atrakhasis Epic is closely associated with Gilgamesh Epic. In this the chief god decides to send the flood because men make so much noise that he cannot sleep.

The Egyptian and Babylonian civilizations were built upon the most fabulous idolatrous myths. The Egyptians believed that the earth hatched form a winged egg that flew around in space and that men hatched from white worms that grew in the Nile. The Babylonians believed that the earth was a living creature that covered itself with feathers and scales in the form of vegetation and rocks and that men were vermin living on the skin of the creature. The Babylonians also believed that their god Marduke created men by spitting, and the men, in turn, created women by spitting, and that the women, finally, created the animals by spitting (Harry Rimmer, Harmony of Science and Scripture, pp. 49-52). According to the Enumah Elish, an Assyrian-Babylonian creation story, “The mother of the gods, Tiamat, creates monsters to eat them up, but the strongest of them--Marduk--cuts her in half. It is from her two halves that the heavens and earth are formed. Mankind is created from the blood of the captured leader of the rebel gods (a sort of devil among the gods) in other to work as slaves for the lazy lower gods and feed the Babylonian pantheon” (Randall Price, The Stones Cry Out, p. 62).

As an adopted son of Pharaoh, Moses was educated in all of the learning of the Egyptians (Acts 7:22), who in turn were familiar with the learning of the ancient Babylonians. Yet not a hint of the ridiculous fables of these pagan people appear anywhere in Moses’ writings.

This was because Moses wrote by divine inspiration and not by his own wisdom and training. Had his writings not been supernaturally-given, he would doubtless had written according to the spirit of his times.