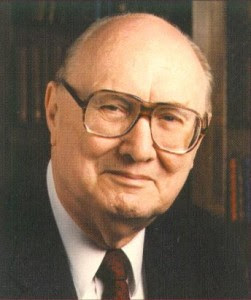 Dispensational Premillennialism
A perusal of Walvoord’s writings makes it clear that his major focus was not upon modern dispensationalism as a system, but upon its eschatological implications. He accepted the theological structure that dispensationalists impose upon the Bible (e.g., literal interpretation, progressive revelation, discontinuity between the covenants, 47 and a sharp contrast between Israel and the church). Embracing the tenets of modern premillennialism, as derived from Chafer (who in turn had been heavily influenced by Scofield) and cogently expressed by Charles Ryrie, 48 Walvoord specifically delineated the prophetical details of that system.


Integral to Walvoord’s understanding of Scripture, as well as to classic dispensationalism as a whole, is the concept of two distinct peoples of God with two distinct programs having two distinct destinies. Also integral is the assumption of the literal integrity of Scripture, which entails the crucial concept that prophecy is not fulfilled figuratively; when a promise is given and later fulfilled in Scripture, it always comes to pass literally and specifically (i.e., the fulfilment directly involves the very people to whom the promise was originally given). 49 The two distinct peoples having two separate destinies are Israel and the church (a people neither Jew nor Gentile, but a new entity in Christ). The covenantal promises made to Israel (the Abrahamic, Davidic, and new covenants) are yet to be fulfilled; in the meantime, Israel has been scattered among the Gentiles because of her disobedience.
On the basis of his concept of prophetic fulfillment Walvoord concludes that there is to be a future for ethnic Israel:
1. It is obvious that Israel has not possessed the land permanently.
2. The prophets clearly promise that Israel will be regathered from the third dispersion and be in her land during the millennial kingdom.
3. It is evident that the promises given to Israel will not be fulfilled by the church or the Gentiles.
4. So the promise must be fulfilled by the physical seed of Jacob in keeping with the Abrahamic covenant. 50
The church age, which commenced on the day of Pentecost ( Acts 2 ), is distinct from God’s program for Israel. It is an era in which the fulfilment of God’s promises to the nation Israel has been postponed. God in this era is provoking Israel to jealousy by turning to the Gentiles; in a sense unknown or unanticipated in the Old Testament Scriptures, the present era is an age of grace for non-Jews.

Walvoord’s distinction between Israel and the church has recently been modified in at least one respect. In his earlier writings Walvoord struggled with the relation between the church and the new covenant given to Israel ( Jer. 31 ; Heb. 8 ) and concluded with Chafer that there must be two new covenants. 51 More recently, he has come to Scofield’s position that there is but one new covenant with two separate fulfilments. 52 With regard to the Davidic covenant ( 2 Sam. 7 ), however, Walvoord, in contrast to Scofield and the progressive dispensationalists, is unwilling to see a fulfilment in the church. 53 While he is willing to grant that “the Bible does refer to a form of the Kingdom in the present age,” it must not be confused with or allowed to denigrate the future fulfilment. 54 God’s interim program for the peoples of the earth (i.e., the church) will end with the rapture of the church. Inasmuch as various historical events suggest that what is to occur after the rapture, namely, Christ’s second coming with his saints, is near, it is logical to infer that Christ’s coming for his saints is imminent. 55 This distinction between the two aspects of the second coming, a distinction that is built on the assumption of two peoples and two programs of God, is crucial in Walvoord’s schematization. 56 Once the rapture of the church has taken place, God will turn to his people Israel and bring to literal fulfilment the Old Testament promise of a land, a seed (Christ reigning), and universal blessing. However, unrepentant Israel must be brought to this happy state of millennial blessing through judgment—the great tribulation. The chronological framework for these events is found in Daniel 9:24–27 , where the prophet predicts a “seventy week” era for Israel. According to Walvoord, and dispensationalists generally, sixty-nine of those “weeks” were historically fulfilled during the period from Nehemiah’s rebuilding of Jerusalem to the death of Christ. A pivotal “week” (seven years), however, remains. 57 This will be a time of judgment; it will conclude the “times of the Gentiles,” a term that refers to Israel in the Diaspora (i.e., from the Babylonian captivity to the second coming).

In Walvoord’s view, a central part of the scriptural revelation is its “careful explanation of the second coming of Jesus Christ. Many predictions were made about the important events that will occur before Christ’s second coming. When these events are placed in their proper order, the result is a prophetic calendar of what soon may happen in the world.” 58 And, indeed, signs of the second coming as well as precursors of the great tribulation are already evident in history. Walvoord believes that the world is on the brink of a ten-nation confederacy, a revival of the Roman Empire (“the Roman Empire has never had the ending predicted in Scripture”). 59 A world demagogue, the Antichrist, will also emerge, as will an oppressive world religion. 60 According to the prophetic timetable, Israel will make a pact with the revived Roman Empire, a coalition of nations from Western Europe. The nation Israel will be invaded by Russia, a nonaligned power (the king of the north, the prince of Rosh), and be utterly destroyed. 61 This, Walvoord suggests, may catapult the ruler of the ten nations into unrivaled power in the middle of the great tribulation and inaugurate huge judgments against the earth in the latter half of that catastrophic period. 62
The great tribulation will end in a final conflagration, the battle of Armageddon; Christ will return in glory to Mount Zion in an act of divine judgment on the nations. 63 This is the second coming of Christ. “A utopian world will follow.” 64 Christ will inaugurate a literal kingdom upon the earth. The essential purpose of this millennial age will be to fulfil the covenantal promises to Israel. Says Walvoord, “The Millennium will be the occasion of the final restoration of Israel.” 65 At the conclusion of this era, the final judgment of humankind will take place before the great white throne. This will be followed by the creation of the new heavens and new earth, the final abode of the redeemed. 66 Although Walvoord is clear that there are two separate peoples of God with two distinct programs, he is not so clear as to how their eternal destinies will differ. Thus the new Jerusalem, while identified distinctly as the city of the bride (the church), “nevertheless includes in its boundaries the saints of all ages and the holy angels.”67

We have seen that the contribution of John F. Walvoord to the evangelical movement in America and beyond has been twofold. As an industrious visionary president, he used enormous energy to bring a small, debt-encumbered seminary to its current status as a large, prosperous, world-class institution. As a scholar and writer he sought to preserve and advance the heritage of the Bible conference movement as it was represented in a number of Bible institutes and the school of postgraduate education established by his mentor and predecessor. In the former task he was eminently successful; in the latter—the defense of dispensational premillennialism—he was less so. He himself has suggested that his interpretive viewpoint has not attracted the sympathies of the broad spectrum of evangelical scholars. 68 This, however, should not disguise the fact that he is an accomplished scholar whose writings are highly regarded in the evangelical subculture to which he belongs.

Thank you verymuch joannah. May God bless u. Have a great adventure in this blog.